The Gibson Hotel – a decade in Dublin’s Docklands

A decade ago The Gibson Hotel in Dublin’s Docklands opened. Designed by architects Scott Tallan Walker it was named after the iconic guitar brand, the 80’s singer Debbie and a cocktail – and has a subtle musical theme throughout the hotel.

Designer Tim Bebbington who was part of Dublin design agency Neworld Associates played an integral part in each phase of the project including the brand identity, look and feel, typography and colour scheme. Gaelite worked closely with Tim and Neworld Associates on signage design, prototyping, material specification and manufacturing. 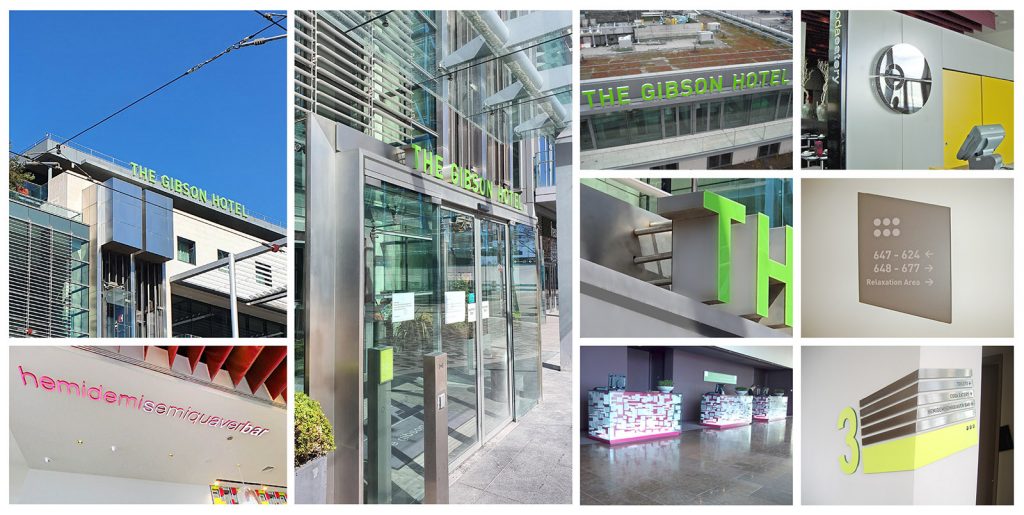 The signage has been meticulously designed and is manufactured to the highest quality. An eclectic mix of styles – wayfinding signage that wraps around corners based on musical staves, floating cube reception desks, huge bright green stainless steel skyline letters on the roofline down to compact entrance doorway letters (which still look great by the way) with the longest standoffs we’ve ever made!

Another unique feature was the 3rd floor ‘Hemidemisemiquaver Bar’ sign.

1) It was manufactured with a groundbreaking manufacturing method that had not been used before.

2) It was the longest word we had ever made into a sign!

3) The sign was mounted on the ceiling, so maybe drinkers only noticed the name of the bar when they were on their back at the end of an evening.

A lot has happened in 10 years. When the Gibson Hotel first opened it was one of the first major developments within the Docklands area – just a stone’s throw away from the ‘3 Arena’ (or the O2 as it was known then). Fast forward to the present day and the area has transformed dramatically with bars, restaurants and apartments opening up – adding to the vibrant and bustling Docklands atmosphere.